The Bartlett History Museum collects, preserves and interprets Bartlett’s rich heritage and shares it with the community through exhibitions, education, and media in order to increase public awareness, knowledge, and appreciation.

Our mission is to inspire appreciation in our rich local heritage by encouraging understanding and preservation of the history of our township.

Dundee Township is an area where new growth and historic preservation stand side by side. We seek your active involvement in the Historical Society. Your financial support by membership dues, donations, and gifts of time as a volunteer (docent, library aide, special events volunteer, etc.) will allow us to achieve our goals.

The Elgin History Museum is housed in an 1856 landmark building known as Old Main that was once part of the Elgin Academy campus. The building was designed in the Greek Revival style. The museum has a staff that helps welcome visitors to the museum, educates the public about Elgin history and assists with research inquiries.

The Elgin Area Historical Society, which was founded in 1961, is a thriving organization that operates within the museum. The society has a board of directors with a mission that is driven to preserve and educate the community about Elgin history.

The Elgin History Museum is housed in an 1856 landmark building known as Old Main that was once part of the Elgin Academy campus. The building was designed in the Greek Revival style. The museum has a staff that helps welcome visitors to the museum, educates the public about Elgin history and assists with research inquiries.

The Elgin Area Historical Society, which was founded in 1961, is a thriving organization that operates within the museum. The society has a board of directors with a mission that is driven to preserve and educate the community about Elgin history.

The natural history collection belonging to Mr. and Mrs. G. P. Lord was first exhibited in the Lords Park Pavilion in 1898. However, it was the Lords’ desire that their collection be housed in its own building. In 1904 local architect David E. Postle was contracted to design a building to serve this purpose. Construction of the current building’s central structure began two years later, to be paid for in donations, the largest donation coming from the Lords. When Mr. Lord died in 1906, the center section of the building had been completed as well as the basement of the west wing, at a cost of $9,856. The following year, the metal roof covering the west basement was removed and the west wing was completed. However, after the death of Mr. Lord, interest in the project declined and the north and east wings of the building were not completed as originally planned. Further delays in opening the Museum were caused by breaks in the floor in 1908 and disagreements over hiring a full-time curator. The goal of housing a museum collection was forgotten as the building served as a storage place for hay from 1909-1911, and as the City Dog Pound, with animals being disposed of in the basement, from 1911-1917. Originally named Lord Memorial Museum, the building finally opened on November 12, 1920 as the Elgin Audubon Museum, the Audubon Society having completed an agreement with the City of Elgin in 1917 to operate the Museum. The Audubon Society was to approve the curator and maintain the exhibits, while the City assumed the finances. The first curator was Charles J. Adkins, who served from 1920-1946, while at the same time working as Parks Caretaker until 1929. The exhibits and display cases, including those made to order by Rhineheimer’s of Elgin, were moved from the Pavilion to the Museum; and in 1921 the Zeigler brothers donated additional cases. In 1933 the basement partitions, fireplace and restrooms were added as a government work project (WPA), at a cost of $2745. When the Elgin Audubon Society disbanded in 1961, the City of Elgin’s Department of Public Property and Recreation took over complete operation of the Museum. The Museum’s name was changed to the Elgin Public Museum in 1975. Although lacking the balance of model in architectural integrity because the east wing was never built, the Museum was recognized by the National Registry of Historic Places as an example of Neo-Classical architecture, as well as for its local historical significance. Finally in August of 1998 ground was broken to complete the east wing. The exterior of the east wing was built to match the original building. Architects Dalquist & Lutzow went so far as to match the brick and oolithic limestone detailing. The interior was built to complement the original design while keeping ADA (American’s with Disabilities Act) requirements in mind. The Elgin Public Museum reopened in July of 2000 with a handicapped accessible north entrance, elevator and public restrooms. New exhibits included Exploring the Waterways: The LaSalle Expedition, Nature of Elgin and a hands-on Children’s Discovery Room. The Museum Store was expanded as well. The Elgin Public Museum is now the oldest building in Illinois built expressly as a museum that is still serving that purpose. Its Neo-Classical style of architecture is unmistakable from the front with its two free columns and two square-engaged columns. Inside the Museum, visitors can still experience the beautiful and original oak woodwork, plaster wall ornamentation and ceramic tile floors. 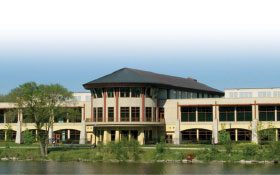 Gail Borden Public Library is not only the third largest library building in Illinois but is also known as the community center. The library is known for bringing in museum exhibits such as SuperCroc and Lego Architecture. What will they do next?

Dinosaurs will be taking over the library for the Summer 2017 season! Experience one of the many interactive exhibits teaching children about dinosaurs or have the 33-foot Jobaria photo bomb your next Facebook photo. Here is a link for specific information on this exhibit.

The primary mission of the Illinois Railway Museum shall be to educate the public as to our nation’s railroad and railway history, by:

* Exhibiting the operation restored rolling stock and equipment on a demonstration rail line; and

* Collecting, preserving, and maintaining a reference library of publications, drawings, technical information, and other materials regarding railroads, railways, and related forms of transportation for research and other purposes.

Designed in 1950 by renown architect Frank Lloyd Wright, the Muirhead Farmhouse is the only known farmhouse designed and built by Wright during his lifetime. Initially built for Robert and Elizabeth Muirhead, the 3,200 sq. ft. Farmhouse is an excellent example of Wright’s Usonian architecture using Chicago common brick, concrete flooring with radiant heat and large window walls. 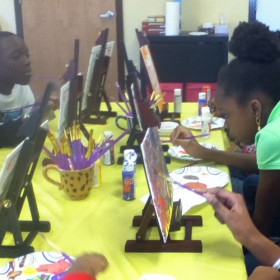 The C.A.K.E. Village is a cultural arts center that is designed to promote and foster an enriched, positive connection between all children and Africa. The C.A.K.E. Village offers school assemblies as well as immersion field trips that include social, visual and performing arts.